The EPFL EMBA Class of 2016 was a groundbreaker in many ways; it was the largest class in the history of the program, the first to go to a bi-weekly schedule that extended class sessions all the way through October, and it was the first to do an international study trip to South Africa. As it did in all other things, the Class of 2016 made the South Africa trip a blazing success!

Previous class groups had gone to China; however, the combination of time zones, visa requirements, the length of the trip, and, most importantly, the language barrier itself, led us to search for an alternative. The goal was to find an English-speaking country with a sufficiently different (non-European) culture so that we could bring our participants more engagement with local businesses. Cape Town, South Africa, quickly became the clear choice. As Professor André Roux of The University of Stellenbosch Business School explained to the group on at the orientation session on the first day, “It is a first-world business environment riding on the back of a third-world economy.” While this may sound strange, he assured us that this is indicative not only of the power of the business community, but also the potential of the country as a whole.

After the orientation session, the group split into teams and each team spent five days working onsite with companies in the Cape Town area. The selection of companies was diverse, including the following firms:

We also had a team working with Think Rise, a Barclays Bank sponsored incubator focused on fintech startups, and another team working with the Urban-Think Tank, a lab at the ETH Zurich School of Architecture, examining the business model of the Empower Shack, a concept for providing efficient housing opportunity to residents of informal communities in Khayelitsha, the fastest growing township in South Africa.

Each team was tasked with addressing a specific challenge that the company was facing. Initial feedback from the companies was uniformly positive. One of the companies immediately included the team’s proffered recommendation in a board of directors meeting, and two others have continued to engage with participants in order to formulate European entry strategies. We already have requests from these and other companies to interact with the Class of 2017 when it is there next November.

Of course, we would not dare to bring the group all the way to Cape Town without providing them the time to enjoy the scenery and the culture of the area, so evenings and weekends were filled with a variety of experiences—Cape of Good Hope, Robben Island, Camps Bay, a variety of local, gourmet restaurants, and—of course—a wine tasting and dinner at one of the many superb Stellenbosch wineries!

The gracious and honorable Swiss Consul General to Cape Town, Bernadette Hunkeler Brown, was kind enough to invite the entire EPFL EMBA class, as well as the local EPFL Alumni Chapter and various members of the business community, to a cocktail reception at the Consular Residence. We thanked her for her kindness, and she pointed out that this was a great opportunity to send 36 ambassadors for Cape Town back to Switzerland.

The trip was indeed a great success and, given the overwhelming feedback from the participants, the Consul General’s goals were indeed achieved. We thank the participating firms, the outstanding support of Karen Eksteen of the Technology Innovation Agency of South Africa, and Camila Swart of Barclays Rise. Special mention goes to Valérie Pouchain of Rêves Afrique for her efforts and a excellent organization of the logistics of the trip. Most of all, thanks is due to the participants for their spirit, their professionalism, and their openness that made this new experience an overwhelming success! 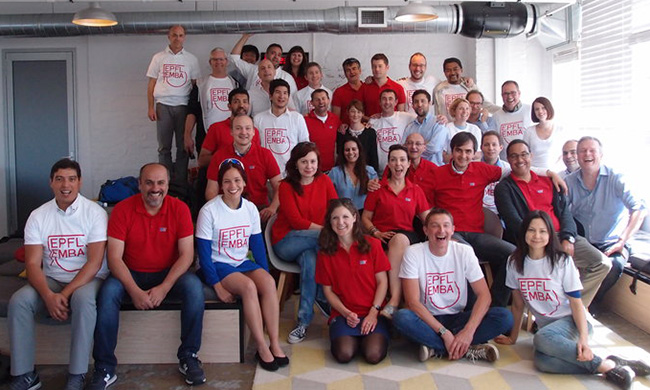